Guide to Removal and Replacement of Heat Exchanger

1. This is a first person account of removing and replacing the heat exchanger from a 2002 Ferrari 360 and is applicable to both the Modena and Spider models. I am a shade tree mechanic with decades of general experience, but only a month of Ferrari experience. This guide may assist a novice mechanic anticipate problems in advance, but expect to encounter issues that this guide does not address. Do not begin this procedure if that makes you uncomfortable.

2. This guide is for entertainment purposes only and is not intended to be official or definitive instructions. Performing these procedures introduces the possibility of personal injury and even death. This guide assumes that the mechanic is familiar with the proper use of personal safety equipment such as eye wear and gloves, safety equipment such as jack stands, and basic tools. I do not assume any responsibility for consequences due to the failure to follow common safety procedures or mechanical practices.

3. This guide is focused on removing and replacing the heat exchanger and generally will not detail ancillary procedures in support of it unless I experienced a situation not generally known. It is organized by (I) Preparing to remove the heat exchanger (HE), (II) Removing the HE, (III) Replacing the HE, (IV) Completing the process, (V) Problems I encountered, and (VI) Notes about the process.

I. Preparation. These steps may be performed in any order.

I.1 Remove rear under the body shell and place car on jack stands or wheel stands. You must gain access under the car to remove the alternator belt and drain coolant.

I.2.a Remove one or both of the seats inside of the car. One seat is adequate to gain convenient access. Remove the seat from the seat rails and the seatbelt from the seat.

I.3.b Remove rear bumper. This step can be eliminated if you can gain access to both gear oil delivery lines at the top and left side of the transaxle through an aftermarket muffler. 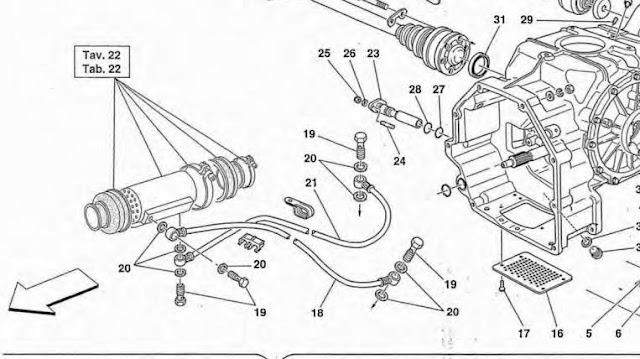 I.4.a Drain engine coolant.
I.4.b Remove expansion tank (you’re going to get a better view of, and access to the coolant and transaxle oil delivery lines with it off). 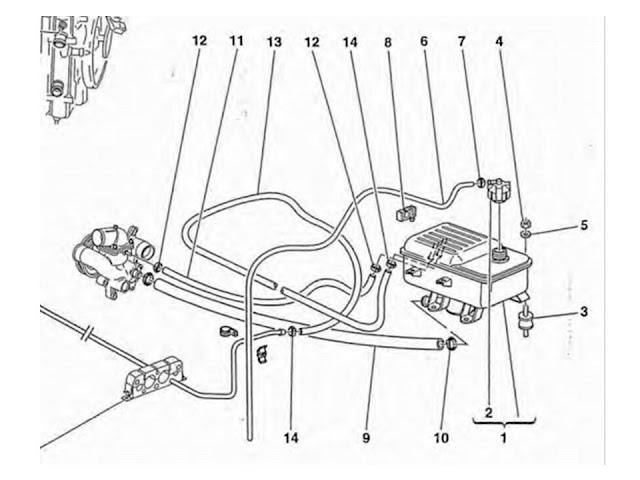 II.6 Pull water pump housing away from the engine. Remove the large and small coolant hoses from the back of the housing. Coolant will drain from the housing and hoses, so a pan underneath is advised.

II.7 Loosen clamp (#35 below) holding the rubber heat exchanger sleeve (#33) onto the water outlet manifold (#36). You will not be able to see this clamp. However, you will be able to feel it and there is room for your hand and a ¼” ratchet. 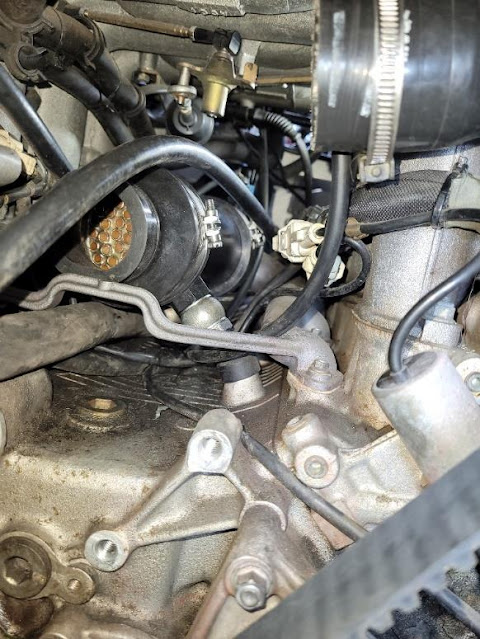 II.9 Remove gear oil coolant lines from heat exchanger. Note which line is for the bottom and side. 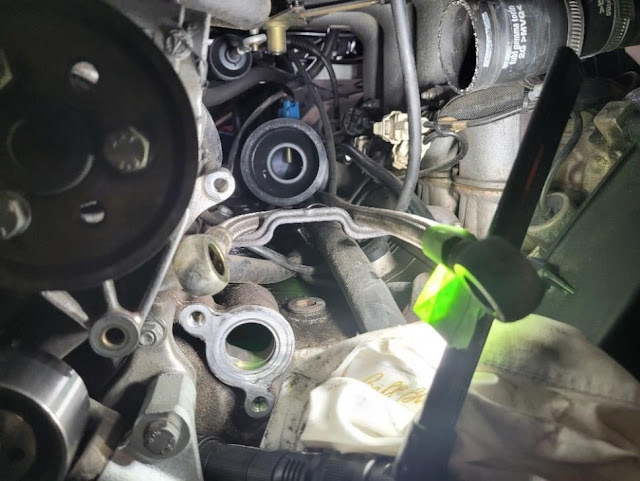 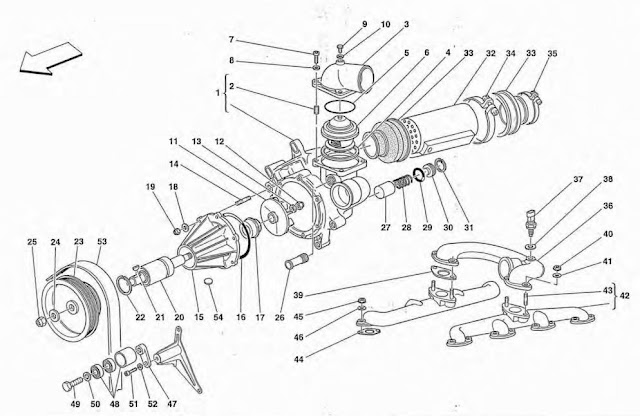 III.2 Torque gear oil delivery lines onto heat exchanger. Ensure they run along the center of the exchanger. Use fresh washers (see VI.4 below).

III.3 Push the heat exchanger onto the water outlet manifold (#36, above). Spraying silicone spray inside the rubber sleeve helps. Don’t tighten the clamp yet.

III.4 Install the oil delivery lines back onto the transaxle. You may have to twist the heat exchanger to get the proper orientation of the oil lines to the transaxle. Use fresh washers (see VI.4 below).

III.5 Tighten heat exchanger sleeve clamp. Ensure the heat exchanger doesn’t sag before tightening by supporting it underneath with a short 2x4 or something similar. 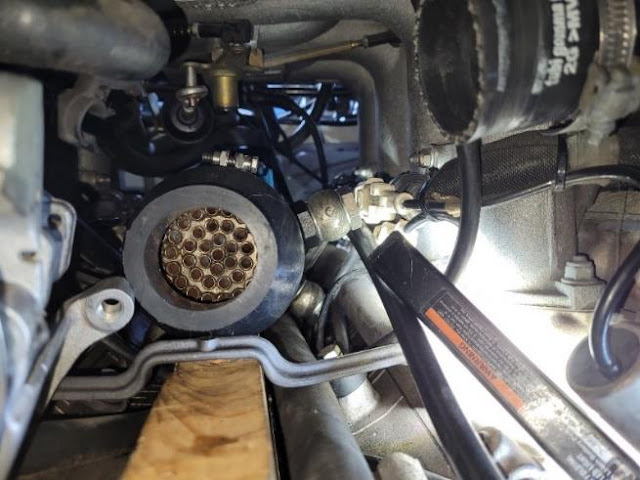 Support the heat exchanger to clear the bracket

IV.6 Loosen the bleed screw at the top of the thermoset housing.

IV.7 Start the engine and wait for it to get to operating temperature.

IV.9 Bleed the cooling system. Even if you used a vacuum filler, there will be an air gap within the motor itself.

V. Problems I encountered. I will detail the problems I faced. You will probably face other problems.

V.1 The alternator tension bolt snapped as I was loosening the tension. Probably the result of years of dirt on the threads of a weakened bolt; or maybe I just loosened it too much. 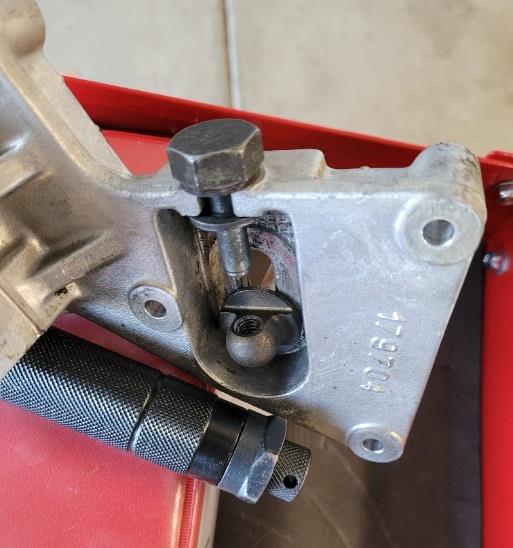 V.2 Two of the four water pump housing screws stripped. That was the first time I stripped hex head screws. These are low-torque screws. I snapped a ¼” drive short extension before stripping the heads with a 3/8” drive. A regular screw extractor didn’t work because I wasn’t able to apply enough force. I then learned that there was such a thing as a hex head extractor. That did it.

V.3 The replacement clamps that I received were not of the original design. The original equipment clamps are similar in design to the T-bolt clamps used in forced induction applications. They are wide and provide even clamping. I received regular screw type clamps. Their narrow design allowed the clamps to tighten at an angle relative to the heat exchanger. I removed them and reused the original clamps. I would try to source T-bolt clamps before using screw clamps.

VI.2 Heat exchanger failures are a known issue with some Ferrari 360s. Failures are usually discovered by an oily residue noted within the coolant in the expansion tank, but I discovered the problem when I drained the transaxle oil. Water in the transaxle can lead to synchro and gear failure. Oil in the coolant can lead to severely degraded cooling. Failures are generally attributed to heat exchangers damaged by corrosion caused by coolant that has not been changed every two years. 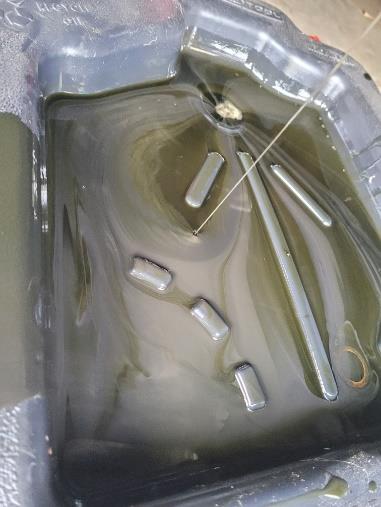 VI.3.a Draining. You can drain coolant by draining each radiator, or drain both radiators at the same time by disconnecting the coolant return line, the right of the two large coolant hoses near the front of the engine. Pressurizing the system with an air hose sealed to the expansion tank filler removes more coolant.

VI.3.b Filling. Some people have reported difficulty filling the radiators to the top using the work shop manual method of filling. You know the radiators aren’t completely filled if the radiator fans don’t come on due to an air gap at the top. If you have an air compressor, refilling the coolant is made much easier with the use of a vacuum filler. However, I suspect that vacuum fillers don’t fill the engine with a closed thermostat, so do a regular bleeding as well.

VI.5 Corrosion. There was significant corrosion detected on all hose bibs of the water pump housing, probably caused by old coolant. I wonder what my radiator looks like? 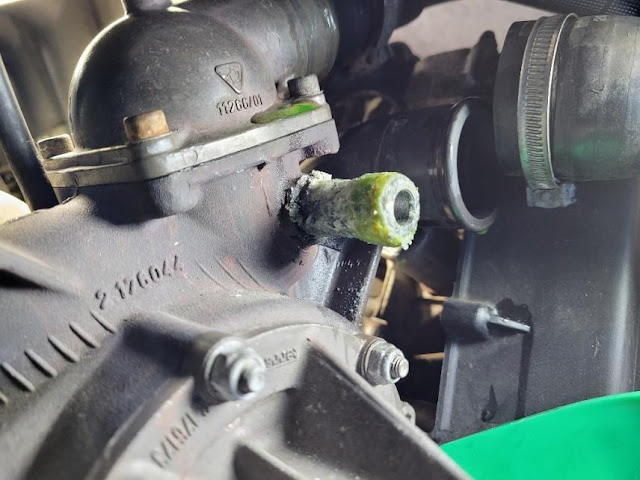 VI.6 Water pump. This is a good time to prophylactically rebuild or replace your water pump and thermostat if you think it necessary. I intended to replace my pumps inner seal, but found out when I began the process that I didn’t have the appropriate tools to do so. I choose to replace the pump with an aftermarket unit after damaging the original seal. The water pump was very difficult to remove from the housing, probably a result of corrosion. I had to purchase a small slide hammer to remove it.

VI.7 Belts. This is a good time to prophylactically replace your three belts if you think it necessary.

VI.8 Power Steering and Alternator Belt adjustment. I have read instructions and viewed a video on adjusting the belts to the correct frequency. I am challenged getting the same frequency while strumming the belts the same way. There isn’t a particularly good frequency measurement app for Android at this time. I receive different frequencies if I use a screwdriver to strum the belt versus my thumb. Once you get a belt at the proper frequency, it changes after you tighten it down. I hate adjusting belts.

VI.9.a Removing all the coolant from the expansion tank to the radiators only removes about half of the coolant within the system. I flushed and filled the system four times, running the engine between each flushing.

VI.9.b I removed and filled gear oil four times as well. The first two times while the Ferrari was still on jack stands, and the third after driving it for 50 miles. I used cheap 80W-90 gear oil the first three fills and good quality Redline oil for the last.