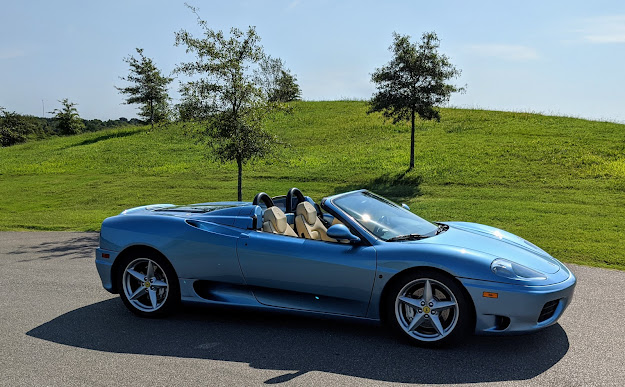 I'm coming up on the one year anniversary of owning my gated Ferrari 360 Spider. In that time, I've learned a tremendous amount about the car and especially, the systems. At this writing, the car is working 100%. I wish I could say that about the entire year. Unfortunately, with any twenty year old exotic, it's going to have good days and bad days.

I've racked up about 1,200 miles in the year without being stranded. The car has had a few close calls but the car always carried me home. Thank you, sweet car, for that!

I had an issue with the throttle bodies (TB) on the day I picked up the car. I just didn't know it. The TB issue would come and go as time passed, masquerading as other issues and finally, causing the engine to go into "pedal limp" (20% throttle). Eventually, the problem was properly diagnosed and cured.

Problems with the TB's can be cured very easily by simply replacing both affected units with new parts at a (parts alone) cost of $3500. Instead of doing things the easy and expensive way, I decided to figure out how the TB's work and importantly, how they fail. It took me a few weeks of screwing around but I managed to develop a testing system that uses a microprocessor and custom written software (by me) to put a TB through a number of tests.
This video shows an early version of the test in action.
In addition to learning how to qualify a TB, I also found a source of spare parts for the internal working parts and can rebuild an old unit to new for about $150. For any other car, it would be far simpler to just toss the suspect TB's in the trash and buy new ones. For the 360, that's a big bill to swallow.
To solve the TB issue on my car, I used the test to determine which TB was bad (right) and the condition of my other TB (left). I bought two used units from the same car on eBay for $200 each and tested those and found that one from the eBay purchase and my left unit matched perfectly in performance. I put those two units back in service on the car and 150 miles later, still no problems.
What's interesting is that the mode of failure for my TB wasn't that the unit failed a potentiometer test or shorted out. The failure was a mismatch in performance between the two units. Both units operated within specification as I understand it but one had a bit more drag in the mid-throttle range that would cause an imbalance between the two units. This imbalance appeared to be enough for the ECU to throw an erroneous trouble code (about the accelerator pots) and go into pedal limp mode (20% limit) when the problem was a TB mismatch.
I wrote a long and detailed article about my journey with throttle bodies here.
Another ongoing failure I've experienced is the capote, or soft top, malfunctioning. Before I picked up the car, the front locking ram failed and was replaced by the owner with a new part. That set him back something like $3,000 in parts and labor. I was grateful it was caught before I drove it away.
What wasn't caught or was so mild as to be easily missed, were two other problems with the capote. The secondary cylinders, which there are two, leaked. I found evidence that they had been leaking for perhaps years before I owned the car. Just seeps at the time but definitely on the road to failure. A good indicator of failing hydraulics is the smell. The hydraulic fluid has a particular and rather strong odor and fresh fluid is much stronger smelling.
The second problem the car had with the capote was the elastic bands that control how the top opens and closes. More than a dozen of these elastic bands abound in the capote. When they are weak or lose their stretch, the fabric has trouble folding and a very important bar that defines the shape of the mid-roof fails to move into a stowed position and jams the top, keeping it from closing. Some of the elastic bands act as counterweights to help the hydraulics move the top. Their failure in my car probably contributed to the secondary cylinder leaks.
I fixed both of those problems recently. The elastic bands are the same thing that is used on stretch pants. The life of any active rubber component is about seven years. Changing these bands at the same time that new tires are purchased will prevent the elastic bands from ever jamming the top.
The leaking secondary cylinders were sent out for rebuilding by Top Hydraulics in Oregon. In less than a week, I had my rebuilt cylinders back in the car. I was quite amazed at how easy it was to change these out. It did help to have the top apart for the elastic bands.
I wrote another long and boring article on my elastic band exercise here.
The top up... 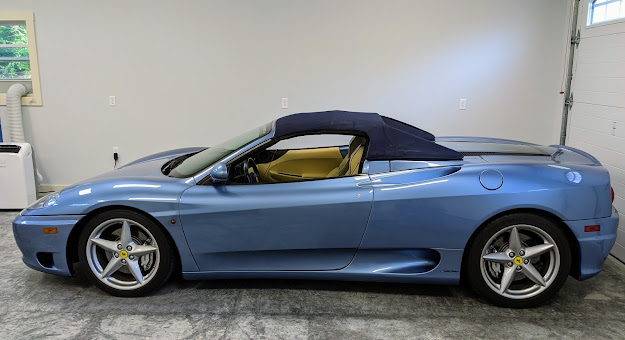 In frustration over the unreliable top, I spent a few months building a hardtop for the car. I finished the prototype shell a few months ago and am working on the trim and other important hardware now. It's actually almost as much work making tiny strips of trim as it was making the entire top. All 100% fabrication with no plan or precedent.
I wrote a mercifully short announcement for my hardtop here.
The hardtop... 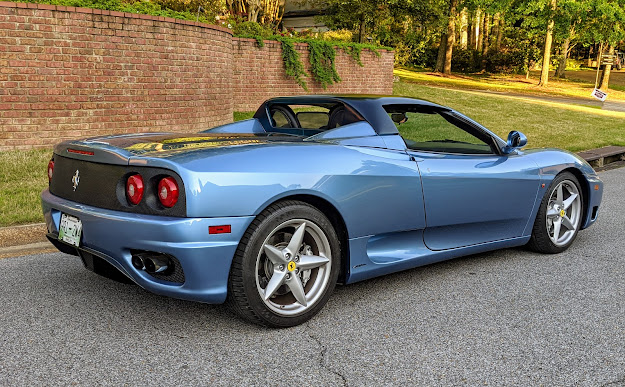 A deal came up to purchase a set of Tubi insulated headers for the car. These things are pure car porn. All stainless steel and brand new. The stock headers are a danger to the car as they contain a pre-catalytic converter that can break up and destroy the engine. It's a bit rare but it's also more common as cars get older. Switching out to the Tubi headers will preserve the originals in case I need to meet some future emission requirement or sell the car. It's likely to be my estate the sells the car so probably a waste. Still, the original equipment should stay with the car in case it matters.
As far as costs, owning the 360 has been reasonable. We spent more maintaining our SL550 during the last year than I've spent on the Ferrari. Granted, we drop the Mercedes off at the dealer and I do all the work on the 360. Still, the car can be cost effective if the labor costs are removed. I can't even remotely imagine how much more I would have spent on maintenance if I had to load it on a truck and send it to Nashville every time I got a trouble code or heard a weird noise. There is no maintenance option in Memphis other than John's Ferrari Service (me).
Besides Maintenance
I've really enjoyed owning the 360 Spider. I heard a lot of negatives about the manual transmission from people who should know. A common thread was that it shifted slowly and the syncros were weak. I haven't seen that. Second gear is a bit tough to cleanly shift if the engine is cold but once warmed up, the entire transmission seems smooth.
A caveat here is that I am not a professional driver, nor have I ever played one on TV. A large percentage of cars I've owned in the past have had manual transmissions and I have driven them hard and to the edge of my abilities on numerous occasions. That makes me an interested amateur and my opinion doesn't count.
Performance wise, this car has way more oomph that I can handle. The 360's power to weight ratio is pretty good but really, it's not about power. It's about handling. This car can corner like no other car I've owned. It's incredibly sticky and the traction control seems effective. I haven't had any issues with the brakes. I think for a track car, that might be an issue but general public road use, the brakes are excellent.
I find the engine sound to be slightly overwhelming at times with the top and windows down. Flooring it in second gear and winding it to 8000 RPM's leaves my ears ringing a bit. The music is pleasant, just a bit overwhelming at times. The muffler system in the car is unique. It could be a one off custom job. Switching to a Tubi would probably mitigate the note somewhat. I may replace the existing muffler just for fun.
Attention
Memphis isn't a car town. There's very little car culture here. I can drive all over town and not even be noticed. People have asked me if the car is a Corvette. A young child asked me if it was a Mustang because of the horse. Now and then someone calls out or waves but the usual response is invisibility. My car lacks shields and is non-red (Azzurro California / Crema) so maybe that has something to do with it as well. I prefer to be anonymous so the amount of attention is just right.
At an event... 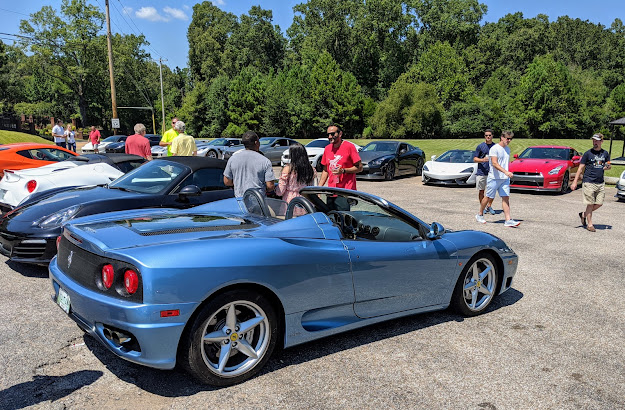 Bottom Line
After a year of ownership, I can honestly say that I intend to keep the car for the foreseeable future. I feel differently about the 360 than I have of any other car I've owned. I am a steward of a piece of automotive history. As a good steward, I feel it is my obligation to make proper repairs and keep the car maintained to the best possible level. I fully expect the car to be in better shape on the day I sell it as the day I bought it. That is my obligation to the future.