Six Months with my Ferrari 360

February 23, 2020
It's been six months now since I brought home my Ferrari 360. I've put over 750 miles on it in that time. Most of my driving has been around town with a few excursions on the expressway. I've driven the car every chance I could, which is any day that the weather is above 60 and the roads are dry. I've enjoyed owning the car for the most part. The frustrating thing about the car has involved the convertible top. It's a nightmare of microswitches and hydraulics and delicate fabric elastic straps. I've had three failures of my top in the few months I've owned it. The first was before I owned it. The previous owner had to fix that. The hydraulic ram that locks the top in place, which is at the very front of the car, failed and spilled hydraulic fluid all over the car.

The second failure involved a crack that some previous owner had fixed. That "fix" failed right after I took my car off the trailer. Took me a few hours of messing around to fix that. My fix will stay fix too.

The third failure of the top happened about a month or so ago. I have two more hydraulic rams that are leaking and will need replacement or at a minimum, replacing an O ring. Regardless of what's wrong with these two rams, they have to be pulled to be fixed. It's not a huge technical job but might require the car to remain disassembled for a couple of weeks while the rams are rebuilt. I'm hoping for the O ring but undoubtedly, it's not the simple fix.

I'm not even going to try and fix the top until later. I don't need the top to go up for most trips. Besides, I find the soft top to be rather ugly and have very restricted visibility. I'd rather just drive the car with the top down.

I posted a pole on a very popular Ferrari forum asking if 360/430 Spider owners are afraid of their tops. The results were pretty striking. (a 430 has the exact same top as a 360) 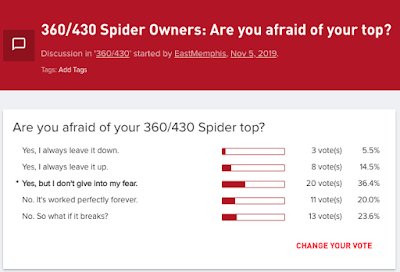 Fifty-seven percent of those that responded to the poll answered "Yes" to the question. The design of the Ferrari 360 and identical 430 soft tops is pretty horrible. It is incredibly failure prone for these fifteen to twenty year old cars. It would be nice if there was an alternative. For instance, a hard top option like a Porsche Boxster or similar. That type of top would be less than optimum since it has to be installed at home and once on, can't be taken off until reaching home again. Maybe someone could invent a hardtop that folded up and fit in the frunk. That would be groovy.

I've also had a number of Check Engine Lights (CEL's) pop up. Most have been just annoying but one caused me to have to turn around and limp home.

The good thing about the Ferrari is that it is very maintainable. Most everything is held together with screws, nuts and bolts. There are some fasteners but so far, they all appear to be the type that don't self destruct the first time they are disassembled.

I've been able to keep up with the car, maintenance wise. This is incredibly important since the closest Ferrari technician is located in Nashville, about a three hour drive. I accepted the responsibility for maintenance before I bought the car. It's a pretty fun car to work on. It's also worth the trouble to do so since getting it fixed elsewhere would be very expensive.

Now that I've had some time behind the wheel, I've become one with the car. I can shift it properly and understand the sounds and smells that emanate from the beast. I've gone over most of the systems looking for potential and known problems and so far, the car appears to be free of those.  The previous owner spent quite a bit replacing virtually every suspension component that goes bad. I expected to have to do that maintenance myself. If I'm lucky, this car will last for a decade before needing those things looked at.

I try to drive the car on a fifty plus mile trip every week. The first part of the drive gets it up to temperature and I'm still close enough to home that I can abort the trip if anything is wrong. The second part takes me around a loop that has regular city roads, some long droning sections where I can hold it steady at sixty, a special spot where I can go full throttle to a hundred and it ends with a slow drive back to my house. It's a really relaxing drive.

The usual use for the Ferrari is to shuttle my daughter to and from school. The cars that drive kids to my daughter's school are typically pretty fancy. There are no other Ferrari's though. Not one. I can tell she likes to be the one climbing out of the car that all the boys are pointing at and yelling about. Twelve year old boys love Ferrari's. When I was twelve, I liked the Ford Maverick. Something must have been wrong with our water.

I've grown a lot more comfortable with driving the 360. At first, every little noise and smell would make my heart race as I scanned the gauges looking for trouble. Now, I know what noises and smells are normal and I can tell when something isn't right by the feel. The car usually performs very well with no anomalies. Sometimes, it does surprise me.

I keep a Bluetooth OBD2 device in my glovebox and have a nice OBD2 app on my phone. It's good to check for codes often. When something doesn't seem right or the CEL light is on, I check for codes.

So is the Ferrari 360 Spider the best thing since sliced bread? Maybe, maybe not. It is a very fine car and one I'll be keeping for a very long time. The odometer just turned over to eighteen thousand. Hardly broken in yet. I can see getting another Ferrari but I can't see ever selling this one. My heirs will have to dispose of it.